One of the most common things between appliances and most things for that matter is age, and when it comes to grills, this means rust! 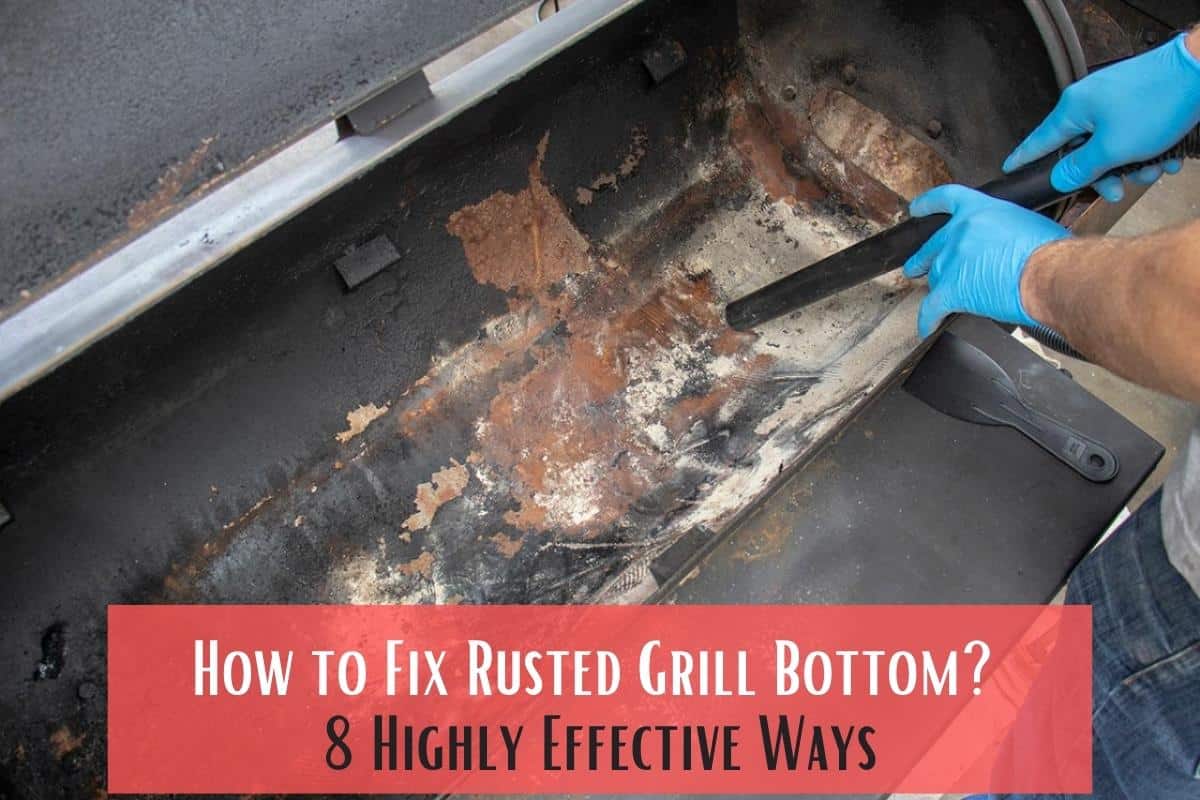 Grills are prone to rust especially at the bottom, owing to their steel construction! But the good news is that there are several ways to get rid of a rusted grill bottom and a few ways to prevent your grill from rusting.

What Causes Rusting of Grill Bottoms?

There are a plethora of reasons for rust accumulating at the bottom of your grill, most notably due to the lack of maintenance and cleaning.

Moisture is yet another reason for grill bottom rusting, and for the short service life of the appliance.

Dirt, debris, drippings, and food leftovers will sink to and cling to the bottom of your grill and produce rust. This food residue tends to rust when left unattended for an extended period of time.

Exposure to Salt and water

Moisture is another culprit of rust on grills, so it’s important to shield your grill when not in use to protect it from rain, snow, and other harsh weather elements.

Using chemical-based products on your grill

Harsh chemical-based products such as cleaning agents can cause rust to occur on your grill’s bottom.

What is the Impact of Rust on a Grill Bottom?

When your grill is rusted at the bottom, you will notice reddish-brown corrosion at the bottom, which is the result of iron particles of steel that are exposed to oxygen and moisture.

This rust peels off layer by layer, therefore weakening and damaging the grill over time.

Is Rust on Grill Bottom Safe?

A grill with rust on the bottom isn’t safe to use, as loose rust may stick to your food. While ingesting rust after a meal or two will not any harm, continuous rust ingestion may be problematic for your overall health and wellbeing.

Rust is basically iron oxide, which when consumed in smaller quantities may add some iron to your diet. But no one likes the idea of indulging in a rusty burger or steak, so it’s best to take the necessary steps to get rid of the rust on your grill.

Speaking of which, one of the other common questions readers ask if you can get tetanus from cooking and consuming food from a rusty grill, and the short answer is no!

The reason for this myth stems from the fact that rusty nails and other sharp objects that pierce use cause tetanus.

However, the bacteria— Clostridium tetani enter your body’s system through piercings, and causes tetanus through the wound, but when present on your rusted grill cannot stand the high heat temperatures of the grill.

Even though cooking on a rusted grill isn’t harmful, it’s recommended that you take the necessary precautions to eliminate rust asap.

Below are 8 effective ways by which you can get rust off your grill bottom.

If you have very small rust spots at the bottom of the grill, you may be able to remove them with just soap and water.

Simply, dip a cloth or grill scrubbing brush in the mixture and gently rub the spots of rust, and wipe the area dry with a clean cloth.

You probably already have baking soda lurking in your kitchen cabinet, which works well to get rid of rust at the bottom and other areas of your grill.

To use baking soda:

If you don’t have access to any tools or cleaning agents, you can use fat and heat to clean the rust from the bottom of the grill.

Take note though that this may not be an effective method of cleaning rust, but is still worth a shot.

Just like baking soda, a vinegar and salt mixture is a great way to remove rust from the bottom of your grill.

Another effective rust remover, lemon juice aka citric acid possesses excellent rust removal properties and provides even better results when combined with a dishwashing detergent. To use this method,

For slightly stubborn rust spots, you can use an abrasive material like a wire brush, steel wool, or sandpaper to scrape them off, but you’ll need to put in a bit of elbow grease for the task.

Brush the rusted areas only until the rust comes off or else you risk damaging the surface permanently.

After the rust is removed, wash the area thoroughly to remove any leftover rust particles, after which you can let the grill air dry.

If you don’t have an abrasive such as sandpaper, you can use a potato (also an abrasive) to grind away the rust.

Potatoes are also rich in oxalic acid, which helps lift the rust off the surface of the bottom of your grill. Cut a potato in half and scrub the rust spots until the rust is gone.

Next rub dish soap over the area (s) to loosen up any remaining rust spots, and clean the grill’s surface.

If the aforementioned methods don’t work, you can use a commercial rust remover to get the job done.

Take note however that some rust removers contain highly dangerous chemicals, so wear gloves and safety glasses with working with chemical-laced products.

When to Go for a Replacement for the Rusted Grill Bottom?

If your grill is rusted beyond repair and is fairly old, then it may be a good time to replace the grill.

It may cost you more in time in effort fixing holes caused by rust at the bottom, which is when buying a new grill makes sense.

Small rust spots in most cases are an easy fix, but if you have large rusted areas, your best bet is to opt for a new grill.

You can try to trade or sell your grill online on marketplaces such as eBay, or speak to your local repairman to see if the rust spots can be fixed, which again will involve sometimes the high cost of professional labor and parts.

How to Maintain Grill Bottoms to Prevent Rusting?

They say “prevention is better than cure”, and there are several ways to prevent rust from occurring on your grill.

1. Clean your grill after each use

Even though you’ve just enjoyed a hearty meal, it’s a good practice to clean your grill after each use. This isn’t just hygienic but also helps get rid of the food, dirt, and debris before they form into rust.

Cover your grill when not in use with a cover to prevent moisture and rust. Make sure you buy the right fitting cover for your grill model to prevent any elements from getting into contact.

If your grill is plagued with rust at the bottom, there’s no reason to break a sweat just yet, because there are many ways to clear rust spots.

Start with using household remedies such as baking soda, vinegar, etc. before moving on to chemical-based rust cleaners.

These commercially available rust removers should ideally be your last resort but are an effective way of removing stubborn rust stains.

If your grill is old and has major rust issues, you may want to look into buying a new grill because fixing the rust will perhaps be a costly affair.

I’m often flooded with questions regarding all aspects of grilling, but one of the interesting ones I’ve come across lately is what are Weber grill vents, more specifically what are the best Weber grill vent settings. Well, the answer to these questions is a bit complex, but I’ve crafted a comprehensive guide on Weber grill… 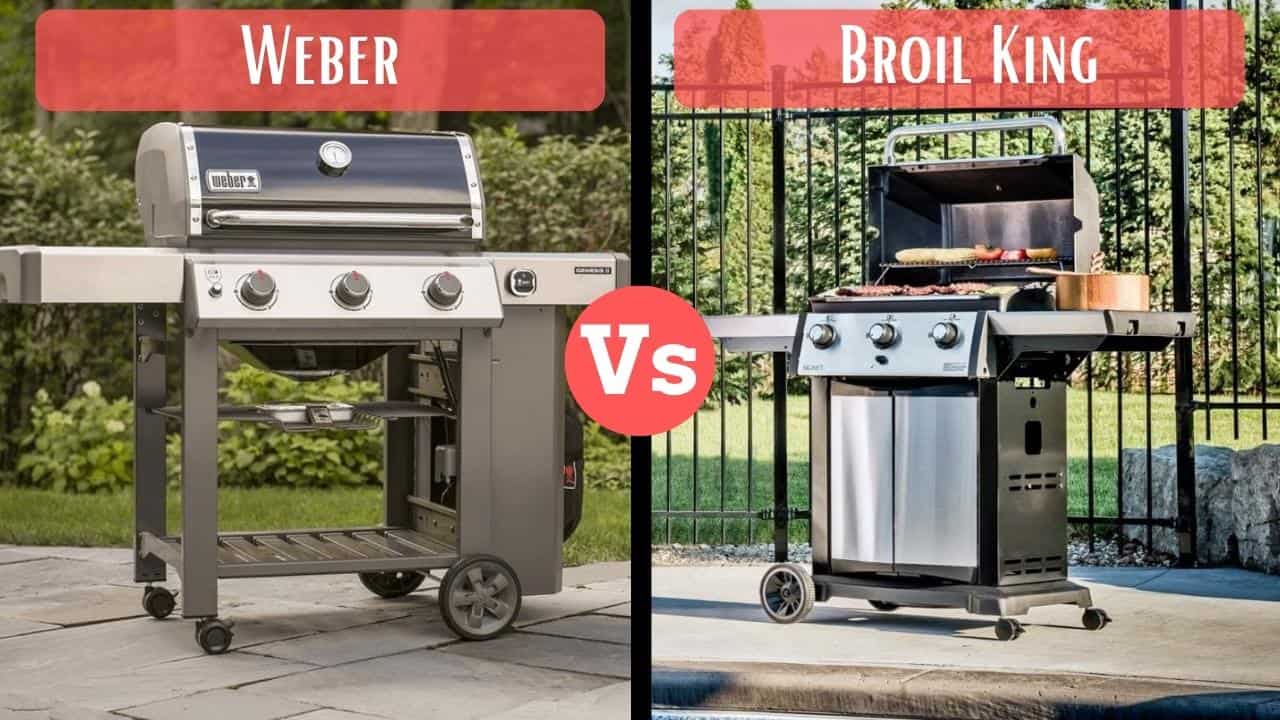 Weber vs Broil King Grills – Which Gas Grill Should You Buy?

I’ve lately been checking out several leading brands in the grill segment, and have compared several grill models alongside such as the Weber vs. Monument Grills showdown. Since Weber is my favorite brand so far and I’ve owned myriad different models over the years, today I’m doing a head-to-head comparison between Weber vs Broil King…

Can You Burn Wood in a Weber Grill? [And How To Start A Wood Fire]

One of the burning questions I’ve been receiving lately from readers is can you burn wood in a Weber grill? And the answer is a resounding “YES”! You can burn wood and charcoal in your Weber grill, and in fact, doing so is a very effective way of transferring both heat and flavor to your…