What To Mix With Venison When Grinding?

When the hunting season kicks in, the best pick for me is to have venison on my dinner table. Having many different cuts of venison, from the topside to the silverside and rump, is perfectly great for me to taste a fine culinary treat. My taste buds are singing in pleasure!

However, most of the time, I take the cuts of venison I have and grind them in a proper fashion, depending on whether I want the deer meat to be of a coarser or finer grind. Ground venison is where all of the juices are, and the ingredients that go along with it truly add punch to the flavor and texture of the already mouth-watering venison. 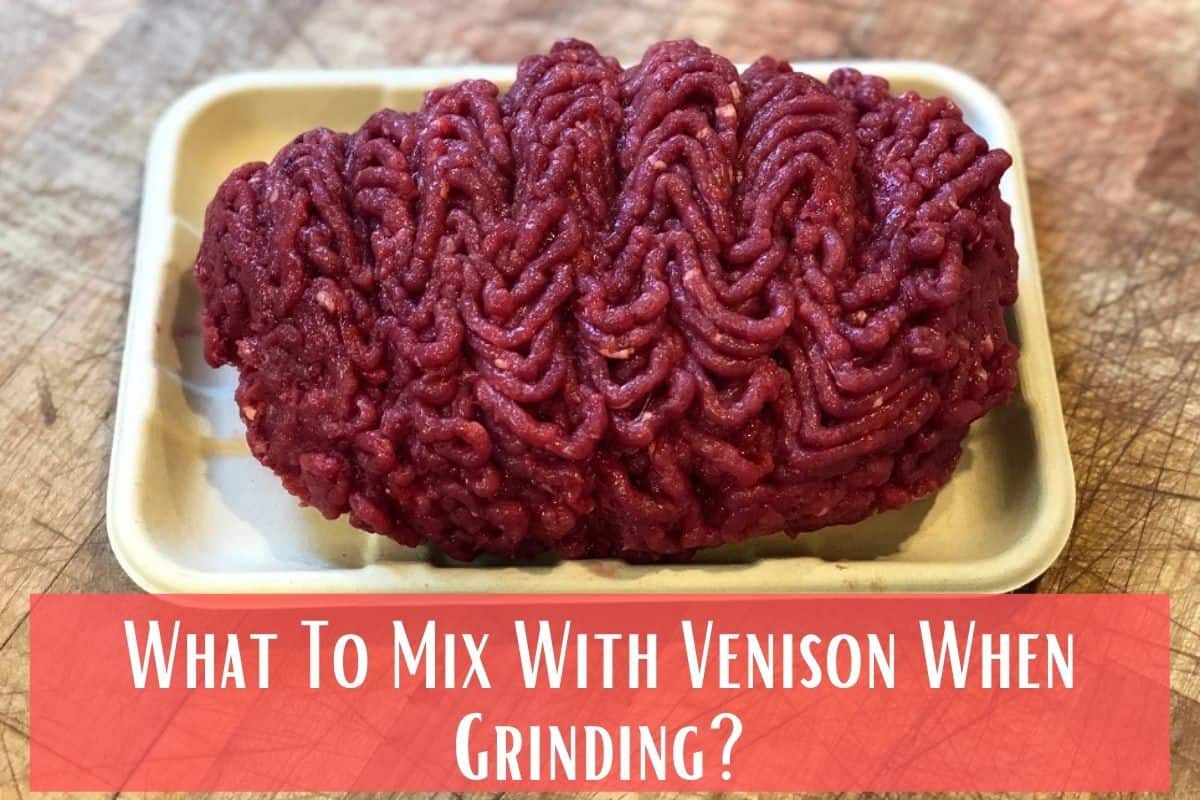 Today, I’m going to teach you what to mix with venison when grinding – especially viable to please everyone’s tastes. Let’s get grinding!

You should always take into account adding fat from other animals to juice the venison up a notch and get the most out of the flavors. Now, we’re going to take a look at what to mix with venison when grinding for different kinds of textures, flavors, and the ratios that go along with the recipes and ingredients.

This goes for the guys and gals who prefer more flavor to their ground venison patties. The best savory mixing component when grinding venison to get more flavor is none other than everybody’s go-to meat – bacon!

In addition to adding bacon, seeing how much bacon you should add to get that distinct flavor is a vital consideration. You should go by a recommended combination of 80% of venison meat and around 20% bacon. Mathematically speaking, for every 1 pound of venison you put in, measure around 0.2 lbs of bacon and add it to the mix when grinding.

For instance, if you have 10 pounds of venison to grind, adding 2 pounds of bacon should do the trick on receiving an outstanding flavor of a mix. A 0.4” grounding plate should be the best option for coarse ground venison mixed with scrumptious pieces of bacon. If you want, you can go for fully cooked bacon, but it’s better to mix it with uncooked bacon so the bacon flavor will stick to the venison when grinding.

Mixing Ground Venison To Get a Coarser Texture

Next up, if you want your ground venison mix to have a coarser texture, then you should add some meat tallow or some slices of bacon for both a coarser texture and adding a bit of flavor in the mix. The greatest part of a coarse grind is that you may not even need a 0.4 inch grounding plate, and instead, you can use your regular sharp knife. 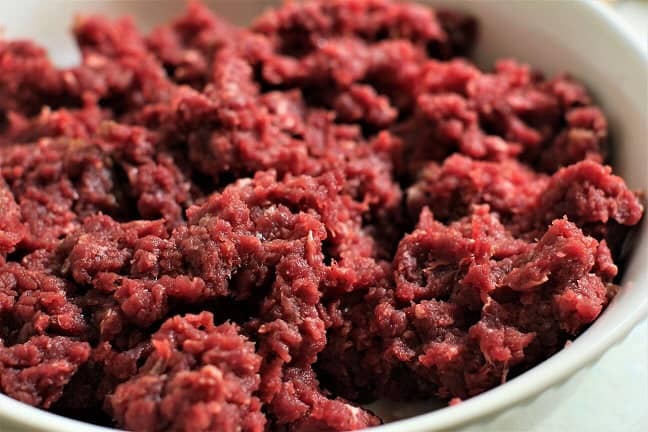 You can easily mince the deer meat with a sharp knife, and if that doesn’t suit you well – put the mix into a blender, and voila!

For the mixture to work out and to get that intended coarser texture, you need around 15% to 20% of meat tallow in 1 pound of venison. The mixture totally depends on what sort of deer meat you use. If you have Mule Deer Venison, then you can use up to 20% of meat tallow. But, if you’re using Whitetail Venison, around 15% should do the mix wonders.

Mixing Ground Venison To Get a Juicier Texture

As for making your ground venison have a juicer texture, you’re not going to be surprised to hear that you need more animal fat. The type of animal fat totally depends on what you intend to cook with the ground venison mix. If you’re up for some burger patties, then you need to get yourself some beef tallow. You can use beef venison with beef tallow for a special tortilla mix, as well. Don’t forget a ⅜ or ½ grinding plate for a finer touch.

As for cooking some super delicious venison sausages, you want to skip the beef tallow and go for pork fat instead. It’ll make your sausages even juicier than with beef tallow, and without the extra juice, no sausage will be good enough.

And, if you want to make some extra juicy sausages, then you’ll need just a tad more pork fat. The ratio should be 80% of venison to roughly 17% of pork fat. Start off with a small batch to see if 0.15 lbs of pork fat for 1 pound of venison works for you; if not, move it up a notch and add 0.17 lbs of the pork fat to 1 lb of venison.

Mixing Ground Venison To Get a Creamy Texture

If it’s a creamy texture that you want, you’ll need to mix up boiled potatoes with the venison. Before you even put the mix, remember to peel off the potatoes. To get the perfect creamy texture, you’ll need around half a boiled, standard-sized potato into 1 lb of ground venison. So this is kind of a half-and-half mix, but without taking the weight of the potato into account.

For 5 lbs of ground venison, you’ll need 2 and a half standard-sized potatoes.

Mixing Ground Venison To Get a Firm Texture

And the best way you can get a firmer texture in your ground venison is by mixing up other meat into the recipe. Beef is superb for those firm, meaty, and juicy patties, while pork is more than great for sausages. Although, you can use beef for sausages, too. 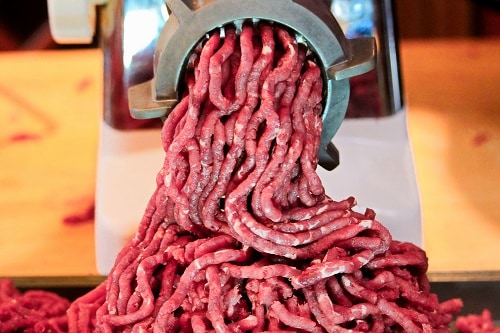 65% or 60% of deer meat along with 40% or 35% of beef meat is a good standard ratio for delicious burger patties, but it may go a half-and-half mixture, depending on your taste. That’s about 0.35 lbs up to 0.5 lbs for a single pound of venison.

As for some firmer sausages, 40% or even 50% of pork or beef meat is a good ratio, making it 0.4 lbs or 0.5 lbs of pork or beef into 1 pound of venison. Don’t forget to use fattier parts of the beef or pork meat.

Best Practices to Follow When Grinding Venison with Added Ingredients

Now that we’ve gotten what to mix with venison when grinding out of the picture, it’s time for you to select which ingredient you’d prefer. After selecting whatever suits your taste, there are some practices that you need to follow so that you’ll get the outcome you were expecting. If you don’t adhere to these practices, you’ll probably end up with some wasted dear meat on top of the other wasted ingredients.

Here are some helpful hints to go by.

You need to stick to these principles like glue to achieve a good batch of ground venison with some extra ingredients in the mix.

How to Prepare Venison for Grinding?

The loins and tenderloins of the deer are the best parts when you’re preparing to grind venison. First, you ought to remove the bones from the flesh to obtain a solid portion of the venison meat. Naturally, you should check if the knife is razor-sharp so it won’t take you ages to skin the meat from the bones.

Next up, you need to clean the meat out of the membrane, or silver skin as they say it since it has nothing to do with your dish and doesn’t add anything to the ground venison.

When you’re done cleaning out the silver skin, you’ll be left with quality, thick meat that’s almost ready for grinding. For the most optimal results, you should start cutting the resulting meat you got in chunks while splitting them into smaller portions and then storing them in the refrigerator. After it’s cooled down a bit, remove it from the fridge and begin grinding it to a fine or coarse grind – depending on how you like the meat.

With the assumption of you going for some awesome ground venison burger patties, you can choose any flavor or seasoning you want; however, remember to marinate the meat before you begin to grill.

Q. How many times can you grind venison?

A: It depends on what you want to make with the ground venison but to be certain that it’s ground like you want it, 2 times should be enough. Firstly grind it to a coarser grind, and then follow up with a finer grind.

Q. What is the ideal venison burger mix ratio?

A: The ideal venison burger ratio is 90/10 or 80/20 venison and animal fat mix. The 80/20 version is superb if you want a juicer venison burger patty.

Q. What kind of fat do you mix with deer meat?

A: The best type of fat (meat tallow) that you want in your ground dear meat is beef tallow. However, pork fat can work too if you want to make venison sausages.

Q. How do you add fat when grinding meat?

A: Firstly, make sure that the fat, meat, and even grinding equipment are cold by putting them in the fridge for an hour or so. Before you put the meat and fat in the grinder, make sure to add the right amount of both. When you’ve cut your meat into small pieces, put both the meat and animal fat in the grinder and grind them equally, with precision.

Q. How do you make ground venison taste less gamey?

A: To make the venison taste less gamey, all you have to do is a good rubdown with butter, margarine, or pork fat. Another option is soaking the ground venison in milk, storing it in the fridge for 12 hours fully covered, and after the time has passed, you should rinse the meat to get rid of the milk.

Q. How much bacon do I need to add to venison?