What is the Correct Meat Grinder Blade Direction?

The blade is perhaps the most important component of a meat grinder, most notably because it does all the hard work! 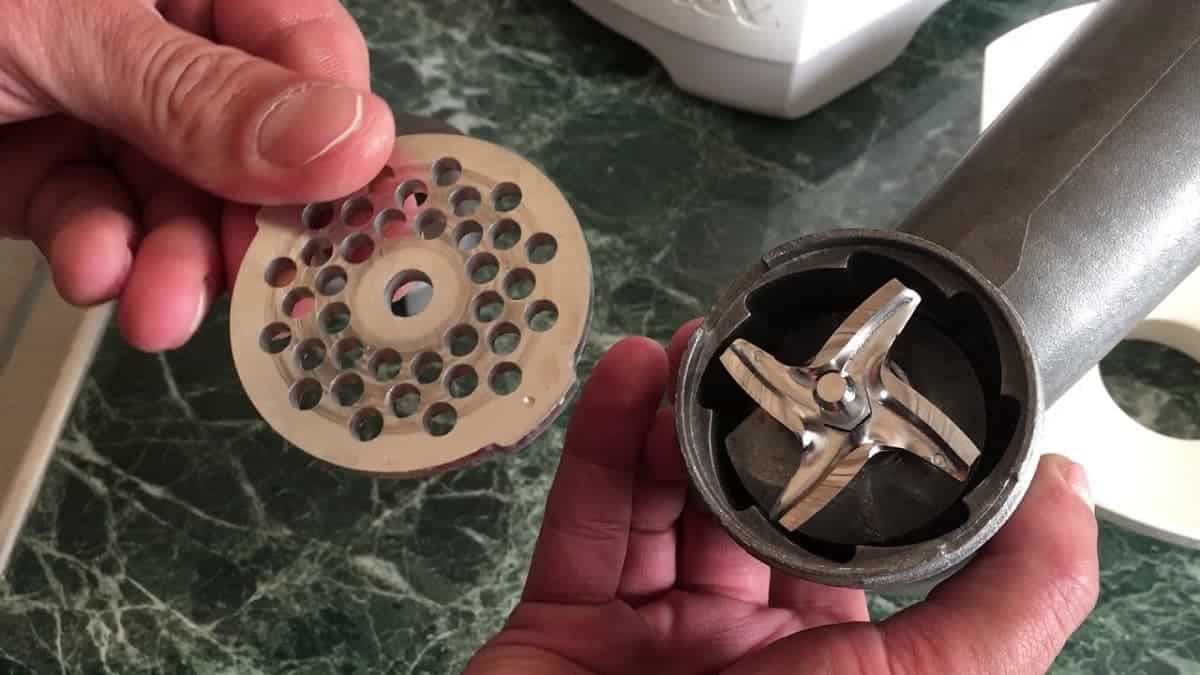 Given that not all meat grinders are built the same, the blade direction can vary across manufacturers. But for the most part, when it comes to assembling a meat grinder, the right direction to install the meat grinder blade is such that it spins in a counterclockwise direction with flat side of the blade facing the front.

The flat side of your meat grinder blade will typically have a number emblazoned on it, which represents the size of the meat grinder.

When you’re trying to figure out the correct meat grinder blade direction including during regular cleaning, repairing or simply when assembling the appliance always refer to the above statement.

What Will Happen if Meat Grinder Blade Direction is Wrong?

If you don’t install the meat grinder blade in the right way or in the right direction, to put is simply, the appliance will not grind the meat well.

When grinding meat in a meat grinder, there are two cutting mechanisms that come into play.

The meat is first cut into smaller pieces by a knife aka blade, and then ground further to match your desired texture with a perforated cutting plate.

Even though the meat grinder blade will spin when powered on, even when it’s not put on properly, it won’t do its job properly, resulting in a poor quality grind.

How to Know if the Meat Grinder Blade is Running in Wrong Direction?

There are few different red flags that can let you know that your meat grinder blade is running in the wrong direction.

For starters, the meat will not go through the wrong side smoothly, as it’s not sharp.

So, if you notice your grinder clogging up often, then it’s time to check the blade to ensure it’s placed in the right direction.

Next, open the grinder head assembly, clean and place the blade back with its flat side facing outwards.

Another way to gauge whether your meat grinder blade is running in wrong direction is by checking the results of the grind.

And after using your meat grinder for a bit, should already know the results you can expect from each grinding plate.

If the ground meat output doesn’t have the desired texture or the results aren’t consistent, then great chances are that you’ve got the blade on the wrong way.

What to do if Meat Grinder Blade Direction is Wrong?

If your meat grinder blade is set in the wrong direction, you ideally have just one option to fix the issue — uninstall and reinstall the blade the right way.

The blade of a meat grinder is set in the head assembly, so you will have to take it apart to get to the blade.

Doing this may sound like a dauting task, but is actually a no brainer.

Since all models vary with regards to assembly, you need to first learn how to assemble a meat grinder.

This will help you place the blade back correctly, and refrain from making the same mistake moving forward.

Unscrew the grinder head assembly and the parts inside including the auger and blade, and place on a table.

Next, clean the grinder parts since you’ve taken them apart, and then place the T-link into the front of the meat grinder, and tighten it into place with the locking screw.

Insert the pushing bar into the T-link, push it all the way back, and place the blade on it with the flat side facing outwards.

You can then attach the remaining parts with the meat grinder including your choice of grinding plate and the food pan.

Turn the meat grinder on, load a few chunks of chilled/frozen meat into the food tray, push it down with the food pusher, and voila – the blade will render the expected texture from each grinding session.