There are two types of people in the world: those who like meat and those who love it! Everyone has an endless craving for that juicy, tender, and soft piece of lamb or beef. Well, that is the best part of a family dinner. 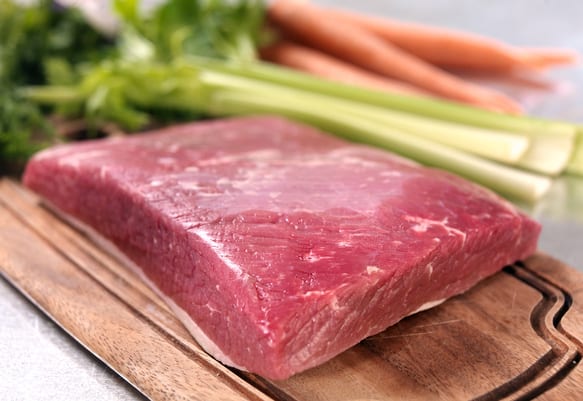 But there is one cut of meat that just melts in your mouth if cooked properly. And that is Brisket. Maybe, the favorite one for many non-vegetarians. The question is: what makes it the best? Any chef can cook a great brisket but lacks the skills of cutting it properly.

What is the Meat Grain?

In meat, the grain is the direction of the muscle fiber. You can easily identify these directions, whether on raw or cooked meat. Though, it might be a bit difficult with grilled brisket due to the grill marks.

If you can you see the white lines on your meat? Those are the grains!

They are more clearly visible in some particular cuts like flank steak, due to its toughness.  They are longer and a large in numbers.

The grain is not the same for every cut of meat. Some might have vertical fibers, while others have horizontal ones. So you should know how to spot it.

Why cutting Against the Grain is ideal?

Well, no one wants to keep chewing the meat forever.

Yes, your teeth can break the tough muscle fiber. But it requires more time to chew even a small bite. 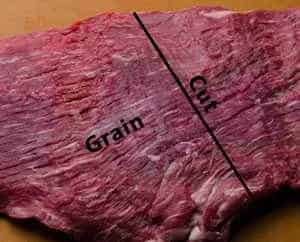 So cutting against the grain reduces the length of the muscle fiber and makes it easily chewable. It will cut the long fibers rather than leaving numbers of long ones.

This way, you can eat comfortably and enjoy the juicy meat you were craving.

How do you know the Grain of a Brisket?

The grain of the brisket is basically the direction in which the muscle fiber is running. You can easily identify the grain on the brisket by the white lines running all across.

Since the brisket has two parts – the flat and the point – the grain will run in a different direction for both. Don’t confuse these lines with the grill marks on your brisket.

Since the grain differs from one cut to another, it is crucial that you know what grain is. Identifying the grain is important because it helps you cut thoroughly against it.

Be careful if it’s your first time. You don’t want to turn it into a disappointment. Ask the butcher or your mother to identify the grain for you.

Do you cut a brisket against the grain or with the grain?

Cutting with the grain makes the brisket harder to chew. On the other hand, if you go against it, the slices will be juicier and softer. It is a bit tricky because the grain of the flat and the point goes in different directions. But it will be worth the effort when you take the first bite.

Cutting the brisket parallel to the grain instead of perpendicular makes it tough and stingy. Slicing it against the grain means getting pieces that are tenderer and less chewy.

Cutting it with the grain can also be a disadvantage for people with weaker teeth. They won’t be able to chew the brisket at all. As there are so many muscle fibers, you must be accurate with the cutting to get those perfect juicy slices.

Everything mentioned above tells you why you should cut your brisket against the grain. Now, it’s time to learn how. The process is simple but requires precision. Before going into that, you need the following things:

Get these three things, and you are good to go.

You can follow these steps to perfectly cut the brisket against the grain:

Start with setting the brisket on the cutting board. Hold it down with one hand, probably the non-dominant one. In most cases, it is the left hand. Keep the knife in the other. The hold should be strong enough to not let the meat move on its own as you cut the brisket. It should move when you want it to.

Brisket comprises two parts: the point and the flat. Press the point of the brisket gently with your left hand. Move it slowly in circles to feel the separation line between the flat and the point. You will be able to feel the tenderness of your brisket. Buttery, isn’t it?

The line where point and flat coincide is where you should make the first cut. This line also separates one grain from the other. As we are cutting against the grain, these two must be separated and cut individually. Be careful with the knife. You want to slice the brisket, not your fingers.

Take the flat piece first. Cut the meat into slices that are about the size of ¼ inch. The fiber, in flat, moves in corresponding directions. So it is easier to slice it up against the grains. Don’t forget to maintain an equal balance of the juicy part with all the pieces. Your guests or even you are not going to like otherwise.

Now, come to the point of the brisket. To see the grains clearly, cut it in half, slicing from the opposite direction of the first cut. See, the moment is fascinating because as you slice it, the juice drips through every part. That’s the time when you realize the worth of your time and money. Rather than hurrying, cut it slowly to enjoy the process.

Take one half of the point, and move it 90 degrees. Now, from the middle, slice the brisket in ¼ inch size as you did with the flat. You would want to keep some amount of the bark on each piece. The bark is the most delicious and juicy part of the brisket. If you remove the entire point from the flat and then cut it, there will be no bark left on that part of the flat. This will take away the best part of the brisket from your friend’s plate. So don’t go with this approach.

Now remains the other half and the last part of the point. Grab it as you did in the previous step, start slicing the same way. Congratulations, your brisket is ready to serve. Everyone is going to love the beautifully cut slices.

That is how you cut your brisket against the grain. Higher the accuracy in your slices, the better taste of the brisket. Get ready for the compliments at the table.

How long should a brisket rest before cutting?

When it is on the grill, the brisket or any other meat will try to retain the moisture. It is better to get it out when the meat is softer. And then, keep it on rest for about 30 to 45 minutes before you cut it. The resting will make the juices thicker and your brisket even tastier.

Keep the brisket on rest for a minimum of 40 minutes and a maximum of two hours. It depends on whether you want to eat it away or save it for later. More than two hours will cool the brisket down and takes away all the taste.

How do you carve a whole brisket?

The simple process of carving the whole brisket would be:

Should you wrap your brisket?

Yes, wrapping the brisket will keep it moist and tender. It also saves cooking time as the wrapping enables you to power through the stall. And after it’s cooked, you can keep it wrapped if you want to save it for later. 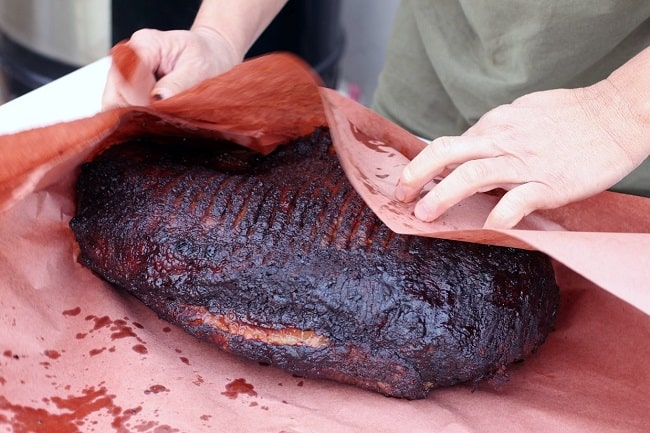 Wrapping will keep it warm and ready for several hours, at least. You can wrap your brisket in butcher paper or aluminum foil. If you wrap it in aluminum foil, it will take less time to cook.

An unwrapped brisket isn’t a bad option either. Though, it takes more time than a wrapped one to cook. Also, there is a risk it might dry before you even get to eat it. But with practice, you can make a perfect unwrapped brisket too.

How much time does a brisket take to cook?

Generally, it takes about 40 to 60 minutes per pound of brisket to cook perfectly. If you are cooking a 15-pound brisket at 135-150 degrees Celsius, it will take about 12-15 hours of cooking.

The whole process, including cutting and cooking, will take about 18 hours. So be ready at least a day before the special dinner at your place, as you don’t want your guests waiting that long.

Is the thickness of the slice important?

Yes, the thickness of the slice holds the same bit of importance as cutting against the grain. The thickness reduces the tenderness of the meat. As muscle fibers are parallel to one another, thick slices would have tough meat that is difficult to chew.

On the other hand, thin lines barely leave any space for the long fibers coming in your way. So remember to keep the slices as think as possible while cutting against the grain.

Cutting your brisket against the grain might be the best thing to do. No one wants to spend the whole day chewing on a slice of brisket. And being called the person who cooked tough meat is a nightmare. You can follow the simple steps to slice it with perfection.

The fresher your raw brisket is, the better it will taste. So buy the perfect one to impress everyone at the dinner. Now that you know why your method of cutting the brisket is important, you are ready to slice it up.

Present them with the most delicious brisket they, or even you have ever eaten. Who knows, you might turn out to be the best chef in the house or at least the best brisket maker. 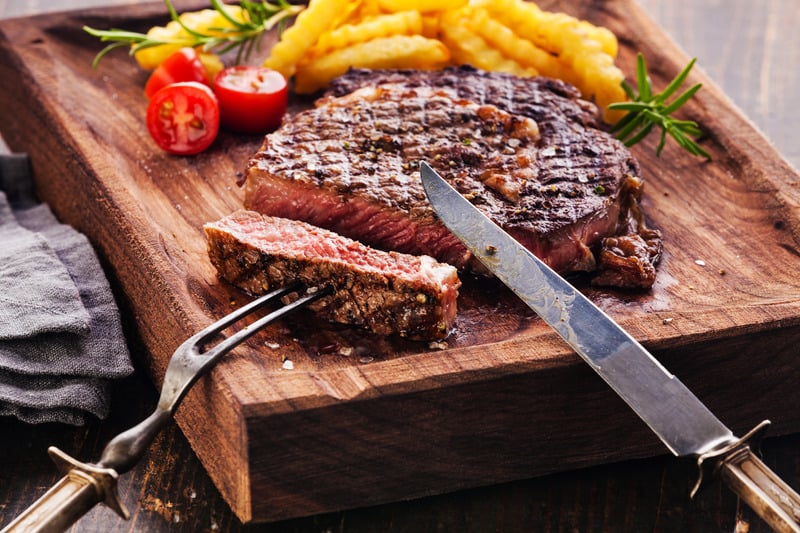 How To Cut Steak Against The Grain?

Did you know that there is a right way and a wrong way to cut steak? I’m sure you didn’t know that. It’s not something that many people know. Most people simply grab a steak and start cutting without any regard for what they’re doing. Unfortunately, that results in a less than ideal steak. And…