How Long to Freeze Meat Before Grinding? 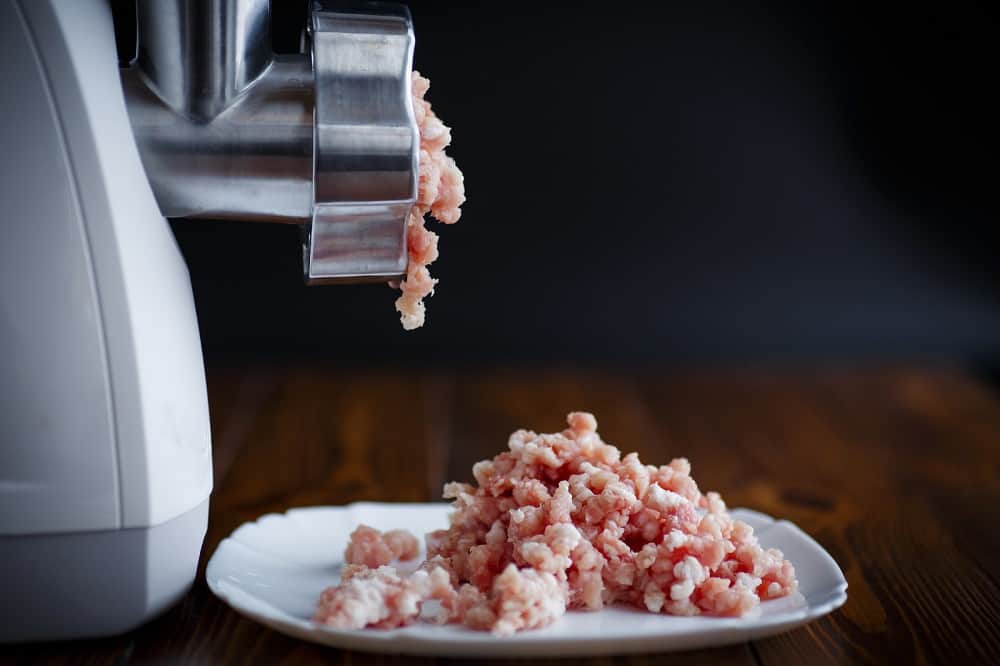 But there are a few things you need to do to prepare meat before grinding, most importantly freezing the meat to a certain degree.

This leads to the big question — how long to freeze meat before grinding?

Well, the answer can be a bit tricky, but short answer is 15 minutes to 30 minutes in your home freezer, and not fridge!

Reason you should freeze meat and not refrigerate meat before grinding is that your goal is to have identifiable chunks of meat and fat rather than a smeared paste after grinding.

How to Know if Meat is Frozen Enough for Grinding?

First thing to understand is that meat needs to be partially frozen before grinding and not rock-hard, fully frozen.

If your meat if already in the freezer, you should thaw it until it reaches a partially frozen state before running it through your meat grinder.

One way to know if meat is frozen enough for grinding is to simply touch it to check that it is nice and chill and a bit tough, and not hard as a rock.

Regardless of whether you use a refrigerator freezer or standalone freezer, leaving meat in these appliances for roughly 30 minutes will probably bring it to grinder friendly state.

Meat should be stored in the freezer before grinding and never the fridge, as the latter won’t partially freeze the meat, but will only keep it cold, just like your other food items such as cheese slices, etc.

In terms of temperature, meat should be kept in the freezer before grinding until it reaches 28 degrees F.

You can check the temperature of the meat easily to avoid any guesswork using a meat thermometer.

The Kizen meat thermometer is available in three great colors, and can take meat temperatures in less than three seconds, so you can start grinding meat quickly.

Why Should Meat be Frozen Before Grinding?

There are several reasons you should freeze meat before grinding, most notably to help it maintain its shape well, and keep it firm, so that it can be ground by the grinder easily.

Another noteworthy reason to grind frozen meat is it greatly reduces the chances of bacteria growth, resulting in less chances of food contamination.

Freezing meat before grinding also gives the meat a great texture, and allows the grinder blade to easily cut rather than much the meat.

It’s also worth mentioning that the grinding action does heat the meat up a bit, so it will squish through the grinder if not properly chilled.

Along with the meat, you should also chill certain meat grinder parts such as the hopper, auger, grinding plates and blade to reduce the heat generated by the grinding process.

The spinning blades of the meat grinder create friction, causing the meat to melt, resulting in smearing, which is a texture you absolutely want to avoid at all costs.

Can you Grind Frozen Meat and Refreeze?

You can grind frozen meat and refreeze, but doing this may affect the texture of the meat, and here’s why!

When meat freezes, ice crystals are created, which affect the meat structure.

So, if you thaw, grind and refreeze more often, it increases the number of ice crystals, resulting in poor texture of the meat.

However, this may not apply to all types of meat, especially bacon, because it’s very fatty to begin with.

Can You Freeze Deer Meat Before Grinding?

You can indeed freeze deer meat aka venison meat before grinding, but it’s best to cut the meat up into roughly 2-inch pieces, vacuum seal them, and keep them your freezer.

Since any meat needs to be partially frozen before grinding, you should remove the portion (s) of deer meat you wish to grind the next day the night before, and keep it in your refrigerator.

This way the meat is half defrosted, and is the ideal condition for your grinder. Both the deer meat and fat should be partially frozen, icy in the middle, and not a rock solid block.