Can Meat Grinders Grind Bone? (And How to Do It)

Meat grinders are handy appliances to have in your kitchen, most notably because they make it convenient to grind fresh meat your way in the comfort of your home. 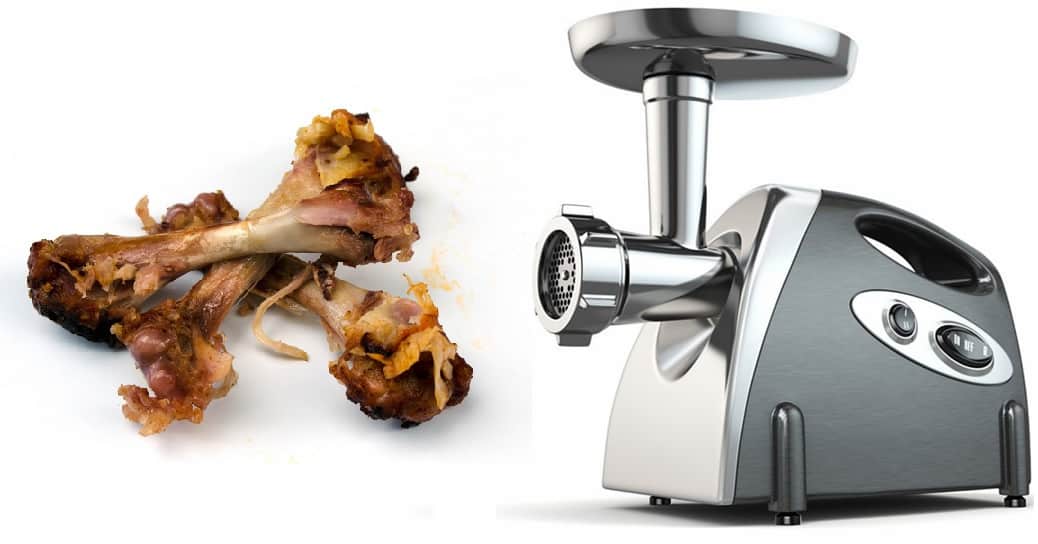 However, one of the most common questions asked is whether a meat grinder can grind bones, and the answer is “YES”, as long as you have the right meat grinder.

Before choosing the right meat grinder to grind bones, you first need to determine whether you’d like to grind only bone pieces separately to make dog bone meals, etc. or are looking to grind meat with bones or both!

Reason being, even though you can grind different types of meat bones in a meat grinder such as beef, deer, chicken, pork, venison, etc., you should try and only grand soft bones, and not large, solid bones that may cause damage to the grinder motor.

Moreover, if you’re going to grind only bones, you will need to check out powerful meat grinders, rather than less powerful models that can grind meat with soft bones.

That said, there are certain factors to consider to ensure that the meat grinder you choose can indeed grind bones. If you’re going to grind solid items such as bones, you’re going to need a high-powered model.

For grinding bones, you absolutely need to stay away from grinders that offer less than 600-watts of power.

Meat grinders that offer more than 600-watts of power work well to grind meat with soft bones, whereas you will have to step it up a few notches if you’re going to be grinding only bones.

The Sunmile SM-G73 Meat Grinder is a great meat grinder for grinding meat with bones, given its 600-watt rated power. It if fitted with robust gears and a gearbox, and can grind up to a whopping 185 lbs of meat per hour.

Further, it is crafted from stainless steel, and comes with a polished cast aluminum grander head.

The Sunmile SM-G73 Meat Grinder grinds chicken bones like butter, but may not work that well with meat that contains more fat/tendon such as pork butt, as the fat may get stuck in the grinding plate.

For grinding only bones without any meat, the ROVSUN electric meat grinder is worth a second look. It is powered by a class leading 800-watt motor, and can be ordered in choice of three different colors including red and silver.

The ROVSUN meat grinder can grind up to 2.25 lbs per minute, and features an integrated breaker to prevent overheating.

What is the Best Meat Grinder for Grinding Meat and Bone for Dog Food?

Ground bones are a great addition to several homemade dog food recipes, and can be made from several different types of bones including the bones or hooves of cows or other animals.

That begs the question – what’s the best meat grinder for grinding meat and bone for dog food? Well, it’s none other than the Sunmile SM-G50 ETL electric meat grinder, and here’s why!

The head of the grinder is made from polished cast aluminum, and is both food grade and ETL certified, making it safe to grind bones for your dog.

It comes with three super sharp different stainless steel cutting plates, for coarse, medium and fine grinding of meat and bones, and features a reverse function to remove any meat of bones stuck in the grinder head.

It is however recommended that you chop the bones and meat into smaller pieces to avoid fine, sometimes sharp bone particles from getting into the ground dog bone meal.

Alternatively, if you are looking to purchase a meat grinder with ability to grind bones then you can have a look at our round up article on the best meat grinders for bones, which covers a lot more meat grinder and you can chose the one which suits your budget.

KitchenAid doesn’t offer a standalone meat grinder, but can be had with a grinding attachment.

Even though this attachment is fitted with two cutting blades, grinding bones can be risky business, and doing so may cause damage to the attachment and to the mixer itself.

If you have a KitchenAid grinder attachment, you can give it a shot with extremely soft bones, and check out the results to decide if you want to proceed further.

How to Prepare Bones to Grind in Meat Grinder?

Just like grinding meat in meat grinder, you should chop the bones into smaller pieces, so that they are easier to process by the blades of your meat grinder.

Chicken bones are generally soft, so you can probably out them in the grinder directly or you can easily chop them into smaller sections using a strong pair of kitchen scissors.

Bones are already in a solid state, so you don’t need to chill or freeze them before grinding.

How to Grind Bone in a Meat Grinder?

You can use any meat grinder to grind bones, but it’s highly recommended that you use one that comes with a powerful motor such as the LOVIMELA electric meat grinder.

When grinding bones in a meat grinder, you should start off with the coarse grinding plate for the first grind. You can then switch to medium or fine grind to achieve your desired texture.

Bones contain blood and marrow, hence may begin to smell rancid if left out for a long period of time.

If you’re grinding bones in a meat grinder to use after a while, it’s recommended that you store the ground bones in freezer-safe containers in your freezers.

Even though ground bones stored in the freezer will last for a considerably long time, the quality may diminish after roughly 6 – 12 months.