How Does A Meat Grinder Work?

Buying ground meat at your local butcher or grocery store is a great option, but not the best choice per se. 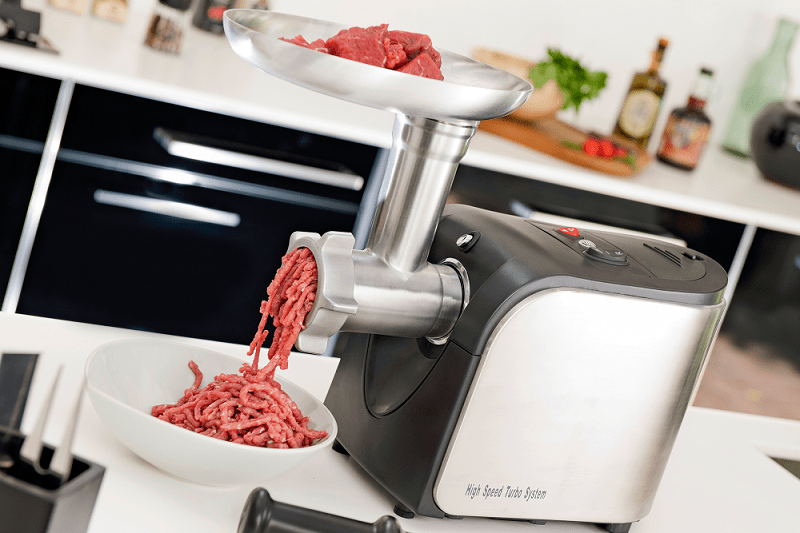 You get rows of prepackaged meat to choose from, available in an assortment of percentages rather than cuts, so you don’t know exactly what parts of animals are added to the blend.

And to make things worse is the dose of chemicals used to sanitize the prepackaged slaughter.

But a smart option is to walk up to your butcher, and select your cut of meat — chuck or round, complete with the inner moisture locked inside.

You then get home, load up the hopper, and grind meat your way in your meat grinder.

But have you ever wondered how does a meat grinder work, and how each part contributes to the process?

Well, the answer for the most part is quite straightforward, where the blades grind the meat as it comes through the meat grinder hopper.

However, there’s a little more too it, and in this article, we aim to provide you with great insight on how electric and manual meat grinder work, the components that make things happen, and how to use your meat grinder efficiently and safely.

What are the Components of an Electric Meat Grinder?

The number of parts of an electric meat grinder can vary across models, but here are the main components, and the role they play in the grinding process. 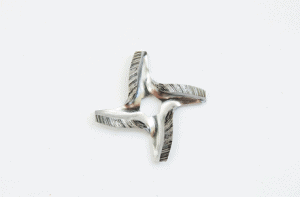 Blades or knives are perhaps one of the most important components of a meat grinder, because they basically do all the work.

Meat grinder blades are not the same as meat grinder plates, as they are responsible for the actual cutting action.

Meat grinder blades are typically made form one of two materials — stainless-steel or carbon steel.

While both are a good choice, stainless-steel meat grinder blades tend to last longer than their carbon steel counterparts, and don’t rust as easily.

The downside of stainless-steel meat grinder blades is that they are not dishwasher safe, and may rust easily when washed in the dishwasher. 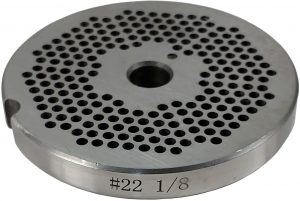 The plates of a meat grinder feature holes, which do not grind the meat, but create the desired texture — fine, medium or coarse.

When shopping for the best meat grinder, it is highly important to pay attention to the size of the included plates, because it dictates the texture of meat you can grind with the respective appliance.

For example, if you’re going to make hamburgers, franks, and bologna, 1/8”, 3/16” and ¼” in diameter meat grinder plates are a good choice.

If you’re going to be making an assortment of different food items such as hamburgers, sausages, and even Kubbe, then choose a meat grinder that comes with several plates and a Kubbe attachment such as the ALTRA Electric Food Meat Grinder. 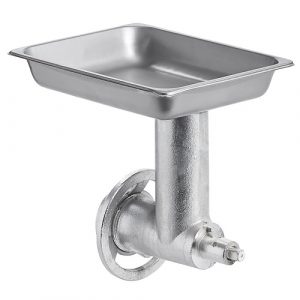 A hopper or food tray is a container that holds the meat that is to be ground.

Meat grinder hoppers can speed up the grinding process by accommodating large amounts of meat at one time, so you don’t have to waste time loading the hopper, but can grind more meat in one go.

Even though meat grinder hoppers are available in sizes big and small, you don’t always have to opt for the biggest one, especially if the quantity of meat you are grinding is minimal.

A good example of the powerful meat grinder with a large durable food tray is the Gourmia GMG525 meat grinder.

And if you’re looking for a robust meat grinder with an extremely large hopper, and one that can grind bones as well, the LEM Products Stainless Steel Big Bite Electric Meat Grinder is truly hard to beat.

An auger, also referred to as a worm is the part that is tasked with ensuring the meat is pushed through the knife, and grinding plates of a meat grinder. 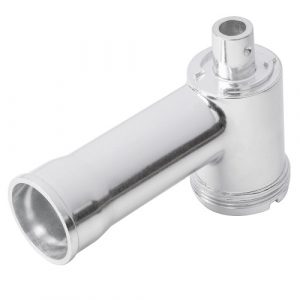 The head houses several different components of a meat grinder including the auger, grinder knife and grinding plates.

The process of assembling the meat grinder head can vary across models, so it’s important to refer to your owner’s manual to set it up the right way.

Some meat grinder heads arrive complete with the food tray, making it easy to freeze food, so it stays cool when grinding.

How Does the Grinding Process on a Electric Meat Grinder Work?

The grinding process of a meat grinder may seem like a no-brainer, where you load the grinder hopper with the meat, and off it goes through the blades, and into your collection tray/bowl.

But given that meat grinders can be big ticket items, there are few things you should do for efficient grinding, and long service life of the appliance.

Step 1. First things first — you need to prepare the meat you are about to grind by chopping it up into smaller one to two inch pieces, and then place them on a baking sheet.

Regardless of the type of meat you’re chopping — chicken, pork, venison, it is highly recommended that you use a good meat cutting board for the task, as this will considerably reduce the chances of food contamination.

Step 2. Next, put the chopped meat in a food safe container, cover it tight, and set it in the freezer for roughly 20 to 30 minutes.

The goal of putting meat in the freezer before chopping is to get it cold and firm, but not frozen.

Additionally, grinding chilled meat also reduces the chances of gumming at the grinder head, especially when working with fatty meat.

Step 3. Most, if not all grinder heads can be easily detached from the grinder, so take yours apart, and set in the freezer too.

Step 4. Now it’s time to grind the meat, so attach the chilled grinder head with the grinder, and grab the chilled meat container out of the freezer.

Step 5. Start feeding the pieces of meat from the top of the grinder, and stuff the meat down with a stomper.

Step 6. Place a bowl below the spot at the bottom of your meat grinder to collect the ground meat.

Tips for Getting the Best Out of Electric Meat Grinder?

Meat grinders can be big ticket items, so here’s a few tips to take note of to grind meat efficiently, and for long meat grinder service life.

1. Freeze the Meat and Grinder Head

As mentioned earlier, it’s highly important to chill the meat and the grinder head, and here’s why!

Warm or room temperature meat tends to smear, and the fat will leak out, resulting in a cooked texture that is pulpy and dry, similar to that of papier-mâché.

You should place the meat grinder head and the meat you’re going to grind in your freezer for about 30 minutes before grinding.

If your meat requires several grinds, such as when making sausages, then grind the meat into a bowl once.

Then either set the bowl in your fridge or into another bowl filled with ice to keep it chilled.

If you don’t chop the meat before grinding, you will end up squeezing it through the grinder plate, which will more than likely give you a chewed-up texture.

3. Keep an Eye Out for Smearing

Fat and sinew accumulation can lead to clogging of the meat grinder.

Fat in the meat melts easily, which can be caused with the heat in your hand, and /or the friction of the meat grinder.

If your meat begins to come out as one big chunk, looks wet, and accumulates on the surface of the die, then you’ve got to stop what you’re doing.

Hit the reverse function of your meat grinder or disassemble the grinder, and clean the parts thoroughly including the blades.

Meat grinder blades can dull over time, so you will have check for dull blades periodically, and sharpen them if necessary.

You can sharpen meat grinder blades with a sharpening stone or keep replacement blades handy for when it’s time to make the switch.

5. Use a Large Grinder Plate First

When grinding meat to achieve an extra-fine texture for certain recipes such as sausages, then be sure to grind the meat twice — first through a large grinding plate, and second through a smaller size plate.

What to Do if Meat gets Stuck in Electric Meat Grinder?

Meat getting stuck in the grinder is inevitable, and there are few things you can do to unclog the machine.

Meat grinders generally come with a “reverse” function for this specific reason.

When this function is triggered in an electric meat grinder, it spins the auger in the opposite direction, so the meat returns to the grinder head opening.

If your meat grinder doesn’t have a “reverse” function, then you will have to detach the appliance, and remove the stuck meat manually.

You need to take special safety precautions when working with any appliance fitted with blades.

What are the Components of a Manual Meat Grinder? 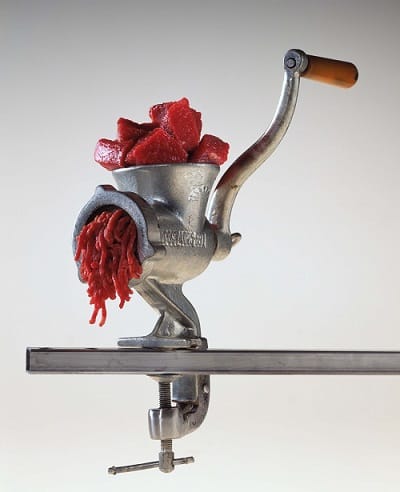 The part that are exclusive to manual meat grinders are:

This is the part that the user had to turn to grind the meat. Most of the best manual meat grinders come with ergonomically designed handles for easy grinding.

How Does the Grinding Process on a Manual Meat Grinder Work?

Similar to electric meat grinders, the grinding process of manual meat grinders is pretty much the same, except of course you’ve got to grind the meat manually with the hand crank.

Step 1: Get started by securing the manual meat grinder with the included clamp tight to your countertop.

Step 2: Chop the meat you want to grind into smaller pieces, and chill meat and grinder head in the freezer for at least an hour before grinding.

Step 3: Grab a large clean bowl, and place it below it the exit of the grinder.

Step 4: To grind the meat, turn the hand crank of the meat grinder slowly until each piece of meat is ground, and then repeat the process for the remaining meat.

Step 5: Take the meat grinder apart, and clean well after each use.

Tips for Getting the Best Out of Manual Meat Grinders?

What to Do if Meat Gets Stuck in Manual Meat Grinders?

Manual meat grinders don’t come with a reverse function, so you will have to put in some elbow grease in case meat gets stuck.

Refer to your owner’s manual on unclogging procedures, which in most cases entails taking apart the grinder, and removing the stuck meat.

1. It is extremely important that you secure the manual meat grinder well on your countertop.

If not secured well, it can come loose when turning the hand crank, and result in injury.

2. Do not turn the hand crank with one hand, and load the meat with the other. Instead, load the meat first into the grinder hopper, and grind the meat.

3. Even though it may seem like a daunting process, especially after you manually grind the meat, it is a good practice to thoroughly clean the manual meat grinder and its parts after each use.